Where: Lobby and on the Deck of Hortense Amsterdam House (2110 G St.)

Undergraduates and graduate students alike will get together for some food, academic advising, intellectual conversation, and a pumpkin-carving competition. Prizes will be awarded for the best anthropologically-themed pumpkins. Carving tools will be provided. The dog will attend. 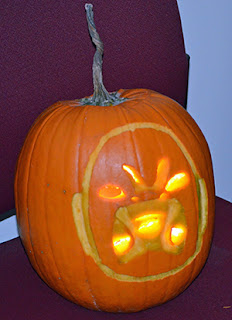 The article written by Amanda Eller is titled: Transactional sex and sexual harassment between professors and students at an urban university in Benin. It was published in the Culture, Health & Sexuality: An International Journal for Research, Intervention and Care. Eller discusses the relationships between female students and their professors. She analyzes the determination of power and how it affects the professor's ability to determine consent as well as why the professor, in these cases, is perceived as the victim.

Undergraduate Peri Buch, a senior in the Columbian College of Arts and Sciences double-majoring in Archaeology and History, has been awarded the prestigious Fulbright Scholarship. She will be studying at the University of Haifa in Israel while on this grant. Peri has worked on multiple archaeological digs in Israel with GW's Dr. Eric Cline, including his sites at Megiddo and tel-Kabri.
Posted by GW Anthropology at 1:30 PM 10 comments:

Liam Buckley, Objects of Love and Decay: Colonial Photographs in a Postcolonial Archive. Wiley, 20.2 (2005).
“Buckley challenges the notion that the path from the past to the present is a straight, visible, and navigable line and situates this idea as a particularly colonial one. Specifically, he complicates the idea that archival materials must stand in the present as a testament to past in perpetuity into the future. Different closely-held interpretations of “past”, “history”, and “future” (for many and overlapping reasons) lead to differential treatments of archival materials.”

Ella Cara Deloria, Waterlily (Lincoln: University of Nebraska Press, 1988)
It's a narrative fiction about a Sioux girl and her grandmother who are the only ones of their tribe to escape a massacre. They are adopted by the Dakota, and the book describes the various intricacies and difficulties that the two women face in learning the new customs and kinship rules. Deloria is a member of Yankton Dakota, and is a Sioux scholar, anthropologist, and ethnographer. She also worked with Franz Boas. The book is a phenomenal and entertaining read.

Jonathan Higman
Pat Shipman, The Invaders: How Humans and Their Dogs Drove the Neanderthals to Extinction (Cambridge: Belknap Press, 2015).

Susan Johnston
Mike Parker Pearson, Stonehenge: A New Understanding:  solving the mysteries of the greatest stone age monument (New York: The Experiment, 2013).
“A terrific overview of the most recent research written for non-specialists.”

Jackie Cahill-Wilson, Late Iron Age and 'Roman' Ireland.
“It's the latest research in what I do.”

Stephen Lubkemann
Baptist, Edward 2014. The Half Has Never Been Told: Slavery and the Making of American Capitalism. Basic Books.
"This should be required reading for every American and if it doesn't win the AHA book award this year it will be a true crime. Who knew that NYC was so implicated in financing King Cotton that it tried to secede with the South? Turns a lot of current historiography on its head--and (consulting my crystal ball) in the next twenty years will be amplified/scaled up from the American case to the global condition in the 19th century. Read with Shama's Rough Crossings,  it recasts understandings of US history in the most profound ways."

Bloch, Maurice 2012. Anthropology and the Cognitive Challenge. Cambridge University Press.
"His most cogent assault on the anthropological tradition that stretches back to Sapir and takes language as the strongest analogue for culture. Wish Geertz was still around to think aloud about this."

Kohn, Eduardo.  2013. How Forests Think: Toward an Anthropology Beyond the Human. University of California Press.
"Latour's actancy on steroids, still too early to say much...however an aside-archaeologists may also find something here to mull over."

Carrier. James and Kalb, Don (Eds.) 2015. Anthropologies of Class: Power, Practice, and Inequality.
"Cambridge University Press. Also very early--but Kalb lays out in the intro a sophisticated case for why class matters and what it is that rips into the narrow operationalizations that hold sway and represent a too-often unrecognized departure from Marx and Engels--and finally the consequences of the discipline's reflexive rejection of 'grand narratives'. Like Bloch--whether you agree or not--this is the kind of argument that (in my view) we would benefit from much more of. By the way-also perhaps the best (or most provocative at least) history of post-WWII anthropology I have run across. So far 2 essays in and both reach the threshold of 'this really makes me (re?)think'."

Beth Moretzky
S. Lochlann Jain, Malignant (Oakland: University of California Press, 2013).
Scott Ross
Louisa Lombard, "Threat economies and armed conservation in northeastern Central African Republic," Geoforum (2015).
“The article complicates armed actors being either rebels or state actors by focusing on the conflict between armed conservationists and illegal poachers. Lombard also discusses armed actors' ability to carry out violence and to hide (physically and metaphorically), which is a useful analytic for studying violence in the rural spaces.”

Robert Shepherd
Thomas Pynchon, Gravity's Rainbow  (New York: Viking Press: 1973).
“It is huge, complicated, and one of the great novels ever written in American English.”

James Ferguson, Give a Man a Fish  (Durham: Duke University Press, 2015).
“This is an insightful analysis of the current state of cash transfer payments and a wonderful response to the vacuous clamor of teaching 'skills' as a way to avoid dependency, a rhetorical claim usually made by people (such as professors and IR students) who have no clue how to fish, and indeed would not fish because this is something others do for you.”

“I have always believed, and I still believe, that whatever good or bad fortune may come our way we can always give it meaning and transform it into something of value.”
― Hermann Hesse, Siddhartha

Posted by GW Anthropology at 3:42 PM No comments: 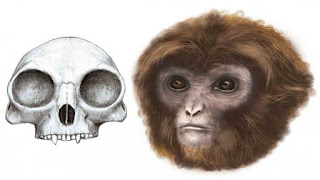 Assistant Professor of Anthropology, Dr. Sergio Almécija,  and a team of researchers from GW have partnered with the Institut Català de Paleontologia Miquel Crusafont to publish evidence in Science Magazine of a new genus and species of ape that is an unlikely ancestor of both apes and humans. (source)
According to Science News, the partial skeleton of an 11.6-million-year-old primitive ape, dubbed Pliobates cataloniae and found near Barcelona, Spain, may force scientists to re-imagine the ancestor of all living apes and humans. With a muzzle like a gibbon but a large brain for its body size, the ancient primate has traits that link it to all apes and humans—yet it weighed only 4 kg to 5 kg.
“This is the first small ape in the fossil record that shows clear features present in all living apes,” says Almécija. “Before this discovery, we had assumed that the living small apes, the gibbons and siamangs, had evolved from larger apes of a size similar to that of a chimpanzee,”
Almécija said he was invited to analyze the fossilized remains by IPC back in 2011, when they were discovered during the construction of a landfill near Barcelona. He said he and his teammates were “stunned” to find a number of similarities between the new species and living apes.
“All scholars in the field of anthropology will start paying more attention to the small primates that lived alongside larger fossil apes in the past,” Almécija said. “Some of them could be also small apes. They just look slightly different that what we would expect, that’s why it’s difficult to identify them for what they are.” (source)

Posted by GW Anthropology at 3:00 PM No comments: 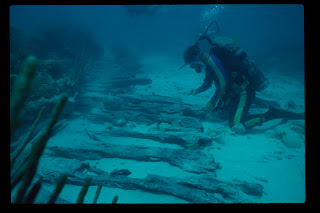 The Department of Anthropology's own Dr. Stephen Lubkemann was featured on CBS's 60 Minutes this past Sunday, November 1st. Dr. Lubkemann discussed his involvement with the recovery of the slaving vessel the Sao Jose, which foundered off the coast of Mozambique and South Africa in 1794.

The Slave Wrecks Project grew out of research initiated here at GW and incorporates a variety of different GW departments and programs including Anthropology, the Capitol Archaeological Institute, Africana Studies, the Diaspora Research Program, and the GW Institute for International Tourism Studies.

According to Dr. Lubkemann, the project has in turn been able to offer opportunities for research and various other types of involvement to over twenty undergraduate and graduate GW students since 2010. It has also spearheaded the development of in-depth GW partnerships with the newest of the Smithsonian museums, as well as with other national and international partners—now in at least 9 different countries including Mozambique, South Africa, Senegal, Portugal, Brazil, and Cuba.

View the 60 Minutes segment on the Sao Jose project here!
Posted by GW Anthropology at 11:07 AM No comments: